Every year during Easter, Sakura-con fills downtown Seattle with all types of anime, manga, Japanese culture, nerd culture, and everything else of an otaku might light. My wife and I were fortunate to be able to go this year. For those unable to attend (or simply want to know what I did while I was there), I’m writing about the panels and events I went to.

An AMV is an anime music video.  Editors cut and paste scenes from different anime set to music.  This year I went to the yearly AMV contest and the AMV Sing-A-Long.  I had almost the most fun of the convention at the Sing-A-Long.  Every song chosen Robynn and I know well.  The pairings of anime to music was hilarious, and there were several Disney songs that were very well done.  However, I want to give a special high-five to the version of Bohemian Rhapsody using Azumanga Daioh.

Funimation was kind enough to host a panel that showcased some the current, popular anime they are working on.  Anime New Network has a very nice write up of the panel.  The write up is so nicely done that I would basically be copy their article.  So, instead, I’ll link to the article (which even includes all of the Q&A) and only write feelings about some of the shows that were showcased.

I’m really happy to see the release of Baka & Test season 2.  However, it was a different anime that caught my eye: Is This a Zombie?  The plot is hilarious and confusing, so I’ll steal from Wikipedia: “Ayumu Aikawa is a zombie resurrected by a necromancer named Eucliwood Hellscythe after being killed by a serial killer.  As he tries to make the best of his undead life, he encounters a Magical Garment Girl named Haruna and inadvertently takes her magic powers, being forced to become a Magical Garment Girl (and thereby crossdress) in the process. With Eucliwood, Haruna, and a vampire ninja named Seraphim living with him, Ayumu helps battle demons known as Megalos while trying to figure out the mystery behind his own death.”  I think this will be an anime worth watching if you like a little weirdness and confusion thrown into your violence.

Do You Really Wish Your Life was Like a Videogame? (“Glitch” web series screening)

I was able to attend the screening of the first season of the web series Glitch.  From the website: “Glitch is a mild-mannered, ordinary decent nobody, who is going through a something of a quarterlife crisis.  In a classic storytelling cliche he makes a wish (that his life was more like a video game) and it comes true – only instead of something awesome and actiony, he is instead plagued by video game glitches. Hi-jinks and the premise of the entire show thus ensue.”

I found the show charming and funny.  There were plenty of video game references throughout, but it didn’t feel over done.  The pacing was even. Without giving away a major plot point, I really enjoyed the “Deus Ex Machnia Achievement” pop up when the plot point was solved by a deus ex machnia.  If you have a couple of hours to kill, I’d watch the first season on YouTube.

Otaku 25 and Older the Third

This is one of the panels I went alone to (Robynn’s not 25 yet).  This was a pretty cool panel with an older group of anime lovers than I’m used to being around.  We discussed our favorite anime, newer anime, cosplaying and talking about the younger crowd.  They group that organized the panel actually recorded the whole thing.  You can find all 7 parts on one of their YouTube channel.  However, I did get to get up and talk about three of my favorite anime.  Check me out starting at about 8:50.

Each year Sakura-con has a charity auction.  I was able to attend and bid on items to help the Make A Wish Foundation.  There were many great items, most of which were out of my price range.  The keynote item was a one of a kind, done at Sakura-con, signed, stamped, illustration by Toshihiro Kawamoto (the character designer and animation director for Cowboy Bebop) of Spike and Faye.  Anyone that knows me knows that I love Cowboy Bebop.  However, the piece went for $3,100.  Even Robynn said no after bids at that point, and she’s an enabler for me when it comes to buying one of a kind piece.

I could have been mine…for the cost of a used car.

However, the piece I was really interested in was a poster of the anime Blue Gender that was signed by the original English voice actors.

Am I the only one that likes Blue Gender?

We had to leave the auction early, and I was hoping they would get to it before I had to go.  It was the last item before we took off.  When the auctioneer asked, “Does anyone like Blue Gender?” Robynn and I were the only ones to yell out.  He actually looked around, shrugged, said, “OK,” and then walked over to Robynn and me to address us personally.  The bidding started at $35 and both Robynn and I raised our hands.  The auctioneer asked if we were bidding against each other.  I loudly exclaimed that no; we are married.  The whole room laughed.  I almost got the poster for $35, but someone in the back room raised it to $50.  I ended up getting it for $75 which was half of what I was willing to pay for it.  You can check it out hanging up in the store. 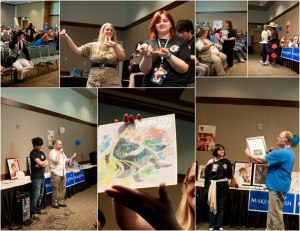 Check me bidding for my poster in the upper right.

There was much more that Robynn and I saw and did at Sakura-con.  However, I tried to write about some of the things I remember really well.  We are already looking forward to next year’s Sakura-con.  For 2014, Robynn may get a booth in Artist Alley, and I’m going to see about running a panel called “So You Want to Own an Anime Store.”  We’ll keep you posted on if we manage to do either of those.