Background
In X-Wing Miniatures Game, you control ships in ship-t0-ship space combat from three different Star Wars factions: Imperial, Rebel, and Scum.  All of the miniatures come prepainted.  The game is designed for small battles of only a few ships on either side.  Each ship offers several different pilot choices as well as different upgrades to make the ship more effective.

Initial Thoughts
The game is very easy to learn how to play.  We have players as young as 9 years old playing.  The game has a chess-like strategy element to it that allows more advanced players to continue enjoying it.  Having played many, many miniature games, it’s nice to have one that doesn’t require me to paint the miniatures.  The stock paint jobs are well done.  However, the ships are easy to repaint if you are so inclined.  There is a bit of a collected aspect to the game.  Different upgrade cards are only available in different ship boxes.  While they are not randomize (you know exactly what’s in each box), you will find yourself buying ships you may not want just to get the upgrade cards.  The game is one of the most balanced miniature games I’ve seen.  There is no “automatic winning” list to play.

Review
Pros: Inexpensive compared to most miniature games.  The base game is $40 and extra small ships are $14.  $100 will get you a tournament level amount of models.  Very easy to learn but with enough strategy to keep the game fun and interesting.  All of the ships and pilots are from established Star Wars canon and not created solely for the game.  The models come prepainted with nice paint jobs.

Con: Limited amount of ship choices and factions.  Currently, there are only 3 factions with each having around 12 ship choices.  Ships are only from after Star Wars New Hope.  Upgrade cards are only available in specific ships.  There are no booster packs offering random cards, and you may end up buying ships you don’t want just to get certain cards.  The ships come prepainted.  If you are more heavily on the hobby side of miniature gaming it can be a negative, but the ships are easily repaintable.

Final Thoughts
Play this game.  It’s fun, easy, and cheap.  First time you blow a Tie Fighter up with an X-Wing, you’re going to want to collect all of the models. 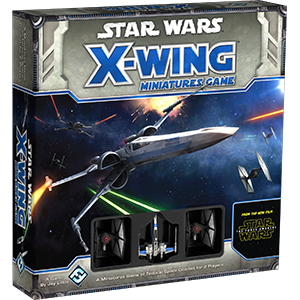