The Annual Clallam County Magic: the Gathering Championship took place on 8/20/16.  This year Anime Kat and Mark’d Body Art were the sponsors.  We had a good turn out for our small town.  A total of 17 players competed to win a part of the prize pool valued at over $1,000.  Big prizes include a booster box of Eternal Masters and a certificate for a tattoo at Mark’d Body Art.

Watch the final match between Evan and Connor.

We just finished the 4th Annual Clallam County Magic: the Gathering Championship.  The Championship is a chance for players to participate in a Modern Format tournament to win big prizes.  This year we had over $1,400 worth of prizes from Anime Kat, and Mark’d Body Art including a full booster box of Modern Masters 2015 and a tattoo vouchers.  This year, we had 11 players.  Here is the final standing and decks the players used: 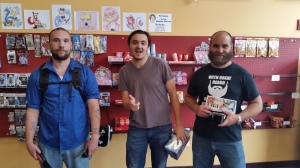 We just finished up with our second paint contest at the store.  This time, the challenge was creating a diorama on a 100mmx150mm base.  There were two prizes given out.  One for People Choice, whoever received the most in-store votes, and one for Judge’s Favorite.  Our unbiased judge, Robynn, was again our judge. 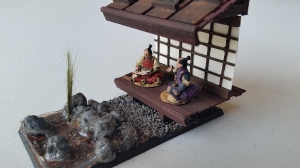 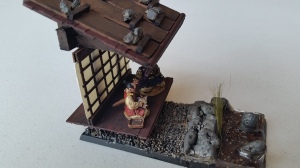 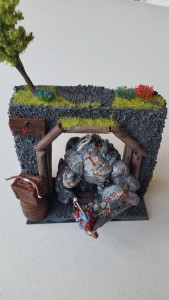 Our next painting contest is all set.  Painters may enter any model usable in Warhammer: Age of Sigmar.  The entry cost is $10 per submitted model. Entries due by 9/22/15 with results announced 9/29/15.  There are three prizes: First and Second place by popular vote, and one Judge’s Award given by an impartial judge. Prizes will be offered as Gift certificates with the value depending on the number of entries.

From MTG Salvation, Khans of Tarkir is the 65th Magic: the Gathering expansion, and the first in the Khans of Tarkir block.  Tarkir is a world embattled with ambitious warlords and powerful clans that wage eternal war for supremacy of their plane, a conflict that spans over a thousand years. Tarkir is also the home plane of the planeswalker Sarkhan Vol.  Tarkir was previously inhabited by dragons, all of whom were killed before Sarkhan’s arrival.  The clans each worship one aspect of the extinct dragons.

Anime Kat offers several events whenever a new set is about to be released.  Always first is the prerelease event.  The First Khans Prerelease event was the largest event Anime Kat has ever hosted.  With 33 total players, the event lasted for 6 rounds.  Congrats to all of the winners from the two days of prerelease events. 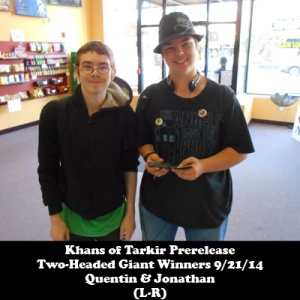 The last major event during the release of a new set is the Game Day.  Game Day is a Standard Format tournament that gives players a chance to play with the newest cards.  Allow players at Anime Kat walk out with promotional cards.  The Top 8 earn additional foil promotional cards, and the 1st Place winner also receives a Champion mat.  For this Game Day, Anime Kat owner Drew took 1st place running a Jeskai Tempo deck.  However, Greg (2nd place) and Will (3rd) were very close behind.  The final standings were based off of Opponent’s Match Win Percentage (you get more points for beating a player with a higher standing).

The next set in the Tarkir block, Fate Reforged, is released January 23, 2015.  We hope to see you at one of our events.

We recently had our annual Clallam County Magic: the Gathering Championship.  The Championship is a chance for players to participate in a Modern Format tournament to win big prizes.  This year we had over $1,500 worth of prizes from Anime Kat, Mark’d Body Art, and Northwest Fudge and Confections and included a custom Anime Kat playmat, full booster boxes of Magic cards, tattoo and piercing vouchers, and other great stuff.

This year we had a total of 12 players for the event, but only one can come out on top.

Congratulations to Travis for his First Place victory.  Good luck to everyone at next year’s Championship.

The second set of Magic the Gathering’s Theros block is Born of the Gods.  On February 1st and 2nd, players got to participate in a prerelease event where they were able to play with the newest cards before they are released on February 7th.  Born of the Gods is a smaller with only 165 cards.  The set introduces a new planeswalker: the blue/green Kiora, the Crashing Wave.  As a continuation of the Theros’ gods, the set also introduces the ten demigods of Theros.  The demigods are dual-colored and uses their controller’s devotion to both of the demiogods’ colors.  Born of the Gods will feature five of them with allied-color combinations while Journey Into Nyx (the final set of the block) will feature the remaining five.

We want to thank everyone that came out to the store for the prerelease event.  A special thanks to the players who came to our Sunday event (Go Seahawks).  Hopefully, next year Wizards of the Coast won’t schedule the prerelease during Super Bowl weekend. 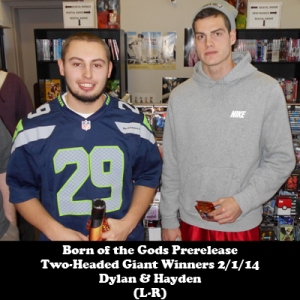 Greetings and salutations.  It’s been 2 months since our last entry.  The holiday season is a busy time for everyone, and we wanted to wait until things slowed down a bit.  But, things aren’t slowing down; they’re speeding up.  Last week’s Yu-Gi-Oh! Sneak Peak started off 4 weeks straight of card game weekends at Anime Kat.  In the middle of all  that is the Born of the Gods prerelease event on February 1st and 2nd.

What else is on the 2nd of February…the big game!  All season Anime Kat has supported the Seattle Seahawks.  If you listen to the radio coverage of the Seahawks’ games on Twilight 96.7, you’ve hear Anime Kat and Mark’d Body Art‘s joint radio ads. (If you haven’t, feel free to listen to the ad here).  You may have noticed we were closed during the Saints and Seahawks playoff game (we were at the game!)

Now, we are giving a gift to other fans.  If you play in any of our three Born of the Gods prerelease events (Feb. 1 & 2) in Seahawks colors or team apparel we will give you a voucher valid during the release weekend for a free pack of Born of the Gods.  That’s right.  Get a free booster pack for supporting the Seahawks.  Only at Anime Kat.  Go HAWKS!

On Sunday November 10, 2013, Anime Kat hosted our very first “Tanksgiving” event.  Tanksgiving is a Warhammer 40k event.  Each participant in the Tanksgiving event fought in a free-for-all vehicle battle against all other participants.  When a player’s vehicle was destroyed they re-spawned from any table edge on their next turn.  When the game ended prizes where awarded based on points. (1pt-immobilized enemy, 2pt-killed enemy, 3pt-killed enemy by ramming, 5pt-killed enemy Super Heavy).  Players also got 10 points for getting the Tanksgiving Cup from the center of the board and successively leaving the battlefield with it.

We had 9 players for our event with some interesting choices of vehicles and obvious winners and losers.

The mighty Ork Stompa took out the mightier Reaver Titan half way through the game.  The Stompa was the only model to take down the Titan.  While Marcus’s Ork Bommer didn’t score any points, it is very important to note that he had the most assists.  It was his craft exploding into flames twice that allowed Duke’s Ork Stompa to pick up the trophy twice and scoring 20 points. 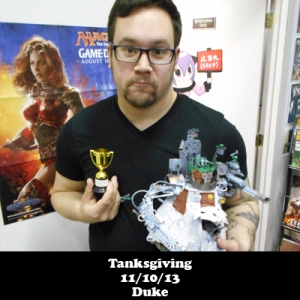 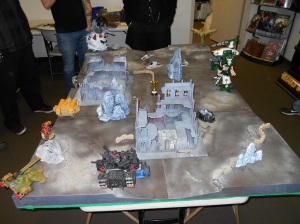 The Stompa takes on the Titan and wins.

An Ork Bommer lines up for a bombing run. 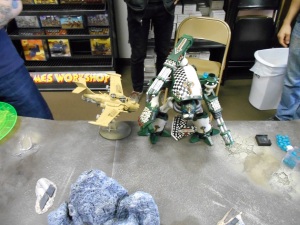 An Ork Bommer takes on a Titan and fails.

On Saturday, 11/9/13 Anime Kat hosted its first Commander Tournament.  According to Wizards of the Coast, Commander (sometimes called “Elder Dragon Highlander”) is a multiplayer Free-for-All game in which any number of players compete against each other as individuals.  It’s played with the Singleton format (in other words, except for basic lands, each card in your deck must have a different name), and each player starts with a life total of 40 rather than the usual 20.  Most importantly, the centerpiece of each deck is a legendary creature that serves as that deck’s commander.

To build a deck, you first choose a legendary creature, called a “commander” or “general,” then construct a Singleton deck around it containing exactly 99 other cards. Only cards of the commander’s color(s) and colorless cards may be included in the deck.

Appropriately enough for a format named after the legendary creature that’s leading your team, your commander works differently from other cards in the game.  Before the game begins, each player removes his or her commander from the game.  You may play your commander from the command zone (no matter how it got there) for its normal costs plus an additional {2} for each previous time it has been played this way.  If your commander would go to the graveyard or the exile zone from anywhere, you may put it into the command zone instead . In addition to the normal Magic loss conditions, if a player is dealt 21 points of combat damage from a single commander over the course of the game, that player loses the game!  Currently, MTG Commander hosts the complete rules for the format.

For our event, we ran 2 rounds (which turned into 3).  All players were divided up into 3 groups for the first round.  The winner of each group went on to play all other winners in a second round.  Because of a great play by Mike,  he and one other player lost simultaneously in the second round forcing a draw.  They went on to a third round were Mike was the last person standing.

Fighting to win Round 1 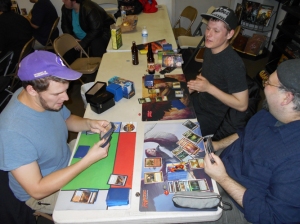 Fighting to win in Round 2

Greetings ghouls and gals!  Every year, the downtown Port Angeles merchants pause their normal day to day activities to pass out candy to all the trick or treaters downtown.  Thousands come downtown to trick or treat in the safe and familiar downtown stores.  This year Anime Kat gave out almost 2,200 pieces of candy and Magic: the Gathering cards (we track how much candy we give out).  We want to thank all of the kids and parents who stopped by our store for candy and a thank you to the fellow businesses to gave out candy.  Happy Halloween to all!

Queen Paula is in charge of handing out candy and Magic: the Gathering cards.

Waiting for candy and Magic: the Gathering cards. 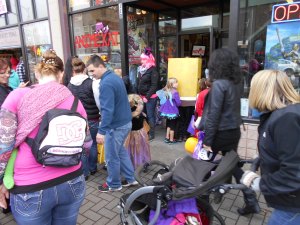